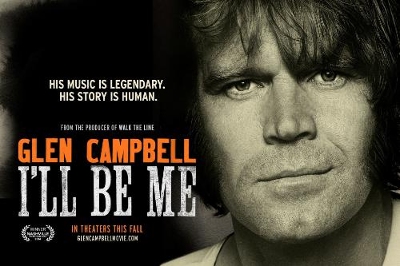 Can anything good come from one family’s ordeal with this horrible disease?

When the man is Glen Campbell, how about an awareness-raising, goosebump-inducing song, farewell tour, and movie about his life and legacy?

Country music singer, songwriter, session guitarist for the Beach Boys, and TV star Glen Campbell has Alzheimer’s. But he did not let the disease define him or even slow him down while this incredible tour and film were being produced. Instead, he and his family did something noble so others would learn more about the disease. If you haven’t heard, the new documentary film about Glen’s farewell tour comes out this fall. It’s called “I’ll Be Me.”

Thanks to an invite from United Methodist Homes (UMH), I was fortunate enough to see a screening of the movie, which UMH hosted at the Endicott Performing Arts Center (EPAC) on a mid-winter Wednesday night. Was I looking forward after a full day of work to seeing what I thought would be a depressing movie? No, I was not. But once the lights went down and the music started, I could tell this was a movie with a message and one I would not soon forget. That is, I hope not.

Alzheimer’s is expected to become THE disease of the baby boomer generation. I will spare you the details of this mind-robbing scourge because you probably know someone with it or have at least heard about it. In the film, it is at once both painful to watch Glen struggle with memory loss and uplifting to see him continue to soldier on and perform his music with joy and remarkable prowess. It is also heart warming to see his family and friends rally around him. Despite not being able to summon the name of the daughter performing with him right next to him on stage, Glen and Ashley Campbell proceed to bring the house down dueling on their respective guitar and banjo. It is moving.

Interviews ranging from U2, Bruce Sringsteen and the Red Hot Chili Peppers, to Brad Paisley, Kathy Mattea and John Cash, Jr., from Vince Gill and Steve Martin to John Boehner, Nancy Pelosi and Bill Clinton, all share an admiration for Glen, his heroic wife Kim, and the legacy they are leaving behind by doing this farewell tour and making this documentary to help destigmatize Alzheimer’s and hasten the search for a cure.

Watch for the movie in theaters this fall: “I’ll Be Me.” The Grammy-winning single—available for free at www.glencampbellmovie.com/redeem — is: “I’m Not Gonna Miss You.” Even if you’re not a fan of country music, you won’t be disappointed.