How to be remembered: The Alzheimer’s App 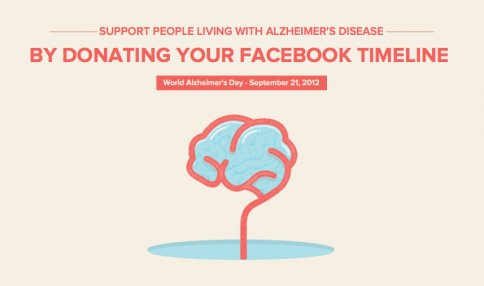 On September 21, to commemorate World Alzheimer’s Day, Alzheimer’s Disease International asked exactly that of participating Facebook users by way of an app developed by (international advertising firm) Ogilvy Brussels. For 24 hours, the Alzheimer’s app temporarily erased information on user’s Facebook Timelines, including pictures, posts, and friends lists. In their place, the app offered this message: “Imagine your life without memories. For 36 million people living with Alzheimer’s disease, this is reality.”

The effect seemed a frighteningly accurate representation of what an Alzheimer’s victim’s daily suffering might feel like, and as Adweek’s David Gianatasio suggests, was all the more powerful because of Ogilvy Brussels’s subtle, low impact ad direction. Gianatasio concedes however, that the subtly of the Alzheimer’s app may cause it to quickly fade from memory, and wonders if a more explicit ad campaign would have been more effective.

So, do you think advertising should move away from in-your-face, high impact television and radio spots, or the instant gratification of print ads and billboards in favor of the Alzheimer’s app’s dialed-down, more thoughtful approach?