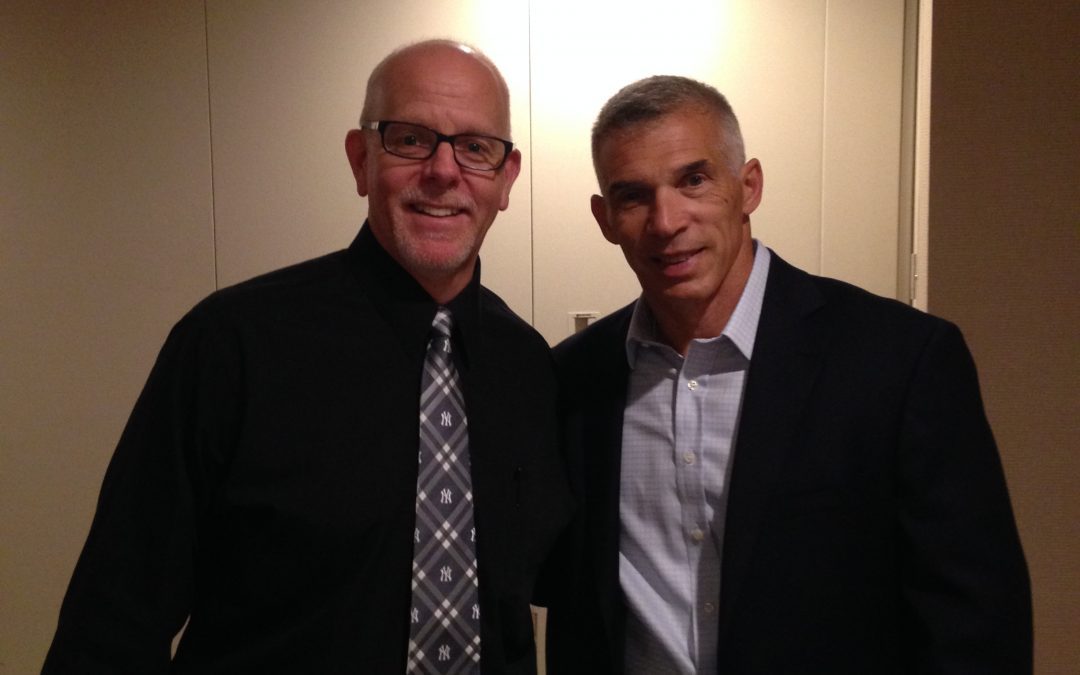 Leaders we can look up to are all too hard to find these days.

Joe Girardi, the former NY Yankees All-Star catcher and World Championship manager is one such leader. Joe is no “dumb jock.” I’ve always admired his leadership style as a player and a manager. Now, in my book anyway, he’s become a leadership guru.

I got to hear him give the keynote address at the Greater Binghamton Sports Hall of Fame induction dinner this spring. He inspired me to be a better leader.

I am a baseball fan. I fly my Yankees flag from April to October and beyond. Yes, that night I got Joe Girardi’s autograph and a picture with him on my iPhone. But I received so much more from him. I have the memory of a humble, soft-spoken man who graciously signed autographs, smiled for pictures, and packed a room as full as I’ve ever seen it. He also filled hearts and moved minds in our community with his words of wisdom.

Joe had come to town early that day. My now retired 11th grade social studies teacher, Mr. Bob Holbert, got the call from the bullpen to drive Joe from the airport to Chenango Valley High School. There Mr. Girardi talked to impressionable middle- and high-school students about sports and leadership.

After that, Mr. Holbert’s instructions were to take Joe out to a nice Italian lunch, but Joe would have none of that. He had work to do. Boning up for his weekend assignment covering baseball for the MLB network was on his mind. A student of the game, a former catcher, he knows how important it is to be prepared. Lunch was the last thing on his agenda.

When it came time for the evening’s after-dinner speech, he did not disappoint the assemblage. Many of the faithful had come out to see their local heroes inducted into Greater Binghamton’s hall of sports greatness. But arguably having Joe Girardi as a headliner is what really packed the house. With all due respect to the local athletes, I know Joe is why my Dad and I were in the hotel ballroom that evening.

The passionate pinstriper, catcher and manager began his remarks by saying that people often ask him how he liked being a Yankee. (He was also a Chicago Cub, Colorado Rockie, and St. Louis Cardinal.) He said his answer depended, like so much of life, on timing. On his first day at the Stadium he was welcomed less than warmly by the Bronx boo-birds, and on his last day, in 2017, he was let go from the job he loved, managing the New York Yankees. Those two days were horrible, he said. Everything in between was the best time of his life.

What do you learn about leadership from growing up in Peoria, Illinois, writing a third-grade essay about wanting to play for the Chicago Cubs, living out that dream at Wrigley Field, then getting called to the Big Apple to play with and manage World Series champions as storied as they get, and in the process winning four rings—three as a player and one as a manager? Joe enjoyed the ride. But he also learned humility from hard knocks, he learned that succeeding 3 out of 10 times as a hitter is difficult, he learned to work hard, he learned to lead by example, and he learned that leadership boils down to two words. What two? He asked both the CV students and the perhaps more jaded and cynical audience at the dinner what they thought those two secrets might be. A hush fell over the crowd. His answer? Love and Hope. A leader’s job is to love and provide hope to others. Take care of each other, he said. Not bad for a jock, huh?

So, this guy in the audience asked Joe the next logical question. “Mr. Girardi, can you speak to us about your faith and the role it has played in your life?” Without missing a beat, Joe went right into a very personal and powerful story about losing his grandfather and mother in a short span of time some 40 years ago, when he was just a teenager. You could hear a pin drop in that room of 500 people, and Joe appeared to get a little choked up recounting the story.

Seems he almost quit baseball then, asking himself: “What am I doing?” With an industrial engineering degree from Northwestern, he surely could make more money doing something other than playing this game. Couldn’t he, he then asked his wife of now nearly 30 years, Kim. As a leader on and off the field, Joe was not afraid to ask for counsel. And counsel him she did. She told him he had a gift—baseball—and that God wants us to use our gifts for good. He just needed to stay true to his faith.

So, Joe stuck around the diamond and the dugout. He has not regretted it. He had a great 15-year career as a player, catching Dwight Gooden’s no-hitter and David Cone’s perfect game. During a ten-year tenure as a manager, he led the Yankees to their 27th World Championship in 2009.

He confessed it hurt to be let go by the Yankees in 2017, and that he hadn’t set foot in a Major League ballpark for nearly two years since. It hurt that bad. But he firmly believes that our hurts, our failures, our setbacks make us stronger and that it’s all part of a larger plan.

He may get back to managing. For the Yankees? For the Cubs? “We’ll see,” he said.

The indelible message he left me and others fortunate to see and hear him that night was loud and clear and contained in a one-word dictum. Believe. Believe in something larger than yourself. And then believe in yourself because of that belief.

Say it’s so, Joe, and thank you for the lesson in leadership.

It’s my custom to end these pieces with a lyric that I believe fits the bill. This one is from Pete Townshend.

Are you doing all you can to believe in, to love, and to infuse hope into those around you? Don’t wait and search forever to get what you’re after as a leader. Give love and hope. Today!