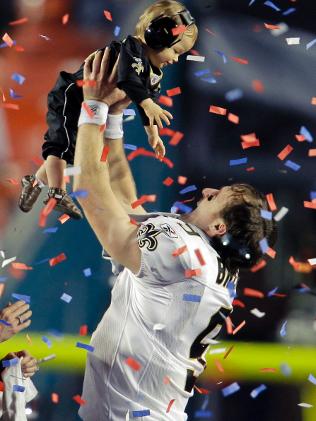 Super Bowl Sunday had it all. A great game, two great teams – and of course, for us ad junkies – plenty of embedded marketing opportunities both during and after the big day.

Brees vs. Manning was pinned as the ultimate David vs. Goliath match-up. You have the league’s MVP, a former number one draft pick, and a man known to sell his name and smile to the highest bidder, pinned against little man Drew Brees, someone who wasn’t deserving of being in that game, according to the 30 teams that didn’t bother offering him a contract.

But as underdog Brees clenched his son and accepted his trophy, every ad exec in the world began scheming how they could use Brees to push their own products.

Brees has since made the rounds, appearing on Letterman, Ellen and Oprah, and has already appeared in commercials for Dove soap and Pampers diapers.

Brees has that it factor that companies look for when they want someone to endorse their products. He has an “overcoming obstacles” story, an entire city behind him, a great personality, and most importantly, he can market himself as a second round draft pick turned world champion.

If you could pick any celebrity to endorse your company’s product or service – and money was no limit – who would it be?